The Lady vs the vagabond

At my hospital quarters, where four rooms are inhabited by me and three interns, there is a kind of a small common place in between the rooms. While at Peradeniya, we had a spacious common room equipped with a comfortable sofa and an ancient but still functioning television, the space here only is large enough to hold a dustbin and a mattress discarded by one of the interns. The dustbin itself was merely a cardboard box and thus was an easy prey for a lot of wondering cats who wanted a snack. So almost every morning we would open our doors to walk on tip toes over a mess of leftover food scattered all over the place. Being the volunteer caretaker of the place since I have more free time than the interns I decided to put an end to the mess by bringing in a huge plastic dustbin to replace its previous representative. The cleaning lady further added a cord tying the dustbin to a wall, so that it was pretty difficult for the cats to turn it upside down. Problem solved, I thought ,sighing with relief.


Well, most of the cats abandoned their efforts to spill the bin, except one, a pregnant female. 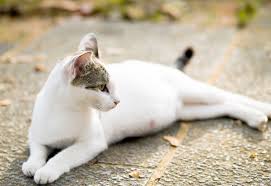 May be like most of the pregnant ladies , she wanted an exception to the rule. Anyway, there she was meowing pathetically whenever we opened our doors, now that she could not spill the bin by herself. And all four of us being sympathetic creatures, me with the added guilt in my heart for being the cause for obstructing her source of food, started leaving out meals for her beside the dustbin. After all how can we turn a blind eye to a pregnant lady who is hungry (which she constantly was)?
Time passed on, and eventually she had  given birth somewhere, we had no idea to how many. Months have passed with her having no intention of letting her offspring meet her food sponsors. But there she would be every time we open our doors, singing her melodies, purring and tangling between our legs as we dash to and fro trying desperately not to fall down after tripping over her. It is obvious that it is time to send her away now and sometimes when you are in a real hurry she becomes a real nuisance, but still we keep on feeding her, pretending it is just for the day.


Two nights back, I opened my door half asleep on my way to one of my frequent nocturnal visits to the bathroom, an extremely unwanted side effect of my pregnancy. Lo and behold, there in front of me was the ugliest looking tom cat I had ever seen, polishing off the remainder of our lady visitor’s dinner.

He looked so big, ugly and wild that he almost frightened the hell out of me. I did not hesitate at all to throw a handful of water at him which sent him off, growling his displeasure at me. Since then, I have seen him several times, sneaking up our stairs whenever he thinks I am not here, to gobble down what we leave for “the lady who was pregnant ages ago”. Every time I see him I chase him way, even if our lady friend had finished her meals way before. I have never encountered our unwanted prowler chasing the lady friend away, or trying to harm her. He has also not dirtied the place in anyway even once. Yet even though I keep on feeding the tabby that is obviously using all her cat wiles to extract food from me, I tent to chase off the tom that does no harm to me, but feeds on whatever leftover the other has refused to eat. Really funny how my mind works.
Posted by ඉගිලෙන ලියමන් at 10:25 AM