In side my teeny weeny room at Karawenelle, I  am peering  at the screen of my lap top. Soft rays of yellow trickle in through the lattice of my window and try unsuccessfully to compete with the bright glare of my laptop.The crisscross pattern of the lattice projects on to the wall beside me and creates the illusion of a huge wall paper of an intricate pattern.The pitter patter made by my fingers running here and there on the key board is the only sound inside the room , except may be the soft sound of my breathing, if I really stop and make an effort to hear it.In and out In and out.
occasionally a door opens in the vicinity and closes with a muffled thud,spaced by the sounds of footsteps: a house officer coming out of his or her room for a vital purpose, like collecting the dinner, brushing before going to bed. I am soaked up in a comfy layer of solitude. 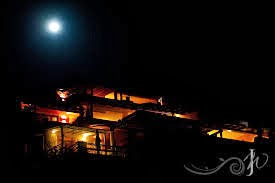 If I turn my neck I can see the dim light outside my room, which improvises the soft moonlight seeping through my lattice. If I give my fingers a break and lean back on my bed, I can hear the funny fast beat of some Tamil song and then rackety rickety noise of the Night koththu boutique across the road. I can hear the three wheelers rumbling by,an Inter-city  bus squealing on its brakes as the drive turns at our bend.I might even hear the slang words used by some construction workers on the other side of the road weary after the days work. If i was outside,  the noises could have made me uneasy I guess. But inside this safe cocoon of mine I can focus on words flowing though my mind through my finger tips and on to the glaring white screen. I can even at times close my eyes and imagine that I am  home, In my solitude and peace.
When you are met with challenges , choices your are forced to make, you never adapt to the present, you just improvise , so that the present appears like your favorite dream of the past.
Posted by ඉගිලෙන ලියමන් at 9:59 PM No comments:

When some one asked me what my hometown was I had this few moments of confusion always in choosing a correct answer .In fact I used to say I was an IDP- an internally displaced person.
I was born in Matara where I attended school for thirteen years.For those thirteen years it was my kingdom. Then I came to Peradeniya for my higher studies and spent another nine years there, and the hostels and the magnificent city became home way from home. In fact during this period my parents relocated to Colombo, but as I was an honorary guest for those first nine years, somehow it slipped from every one's mind to allocate a place for me in our new home. As a  result of which I sleep with my mother's adopted kid( the four legged one) each night in a bed which she thinks is hers while I think its mine. It has been OK up to now, since I have only suffered some minor bites and she none , sadly).
So when I got my post Intern appointment to Karawanella ,thoroughly misunderstanding the situation of course became a "Kabalen Lipata" type one.I was hoping to travel from home each day, which of course could have not been a happy dream, if our public transport system had not decided to travel at a speed of a tortoise( may be much slower when in comes to 122 Awissawella- Pettah). So since I am whining daily about the hardships in travelling, I am now the lucky owner of a wee little Quarters at BH karawanella.It is a cosy little place, the only problem been the heat and dust which engulfs me the moment I open a door or a window, punctuated by occasional water shortages.So I have begun to live the life a gypsy, half my stuff here, half my stuff there.It is only when I arrive at a certain place of the two I realise I have a left a vital part like my toothbrush at the other place( as a result of which I have a huge collection of toothbrushes but not unbrushed teeth).I have given up the idea of bringing my laptop home, and instead take the option of becoming a pain in the you know where of my poor brother.I wear the same kit daily for weeks(washed daily of course) so that is looks like my uniform.
Life indeed seems to be so fun. Now who misinformed me that an IDP has to live a hard life
Posted by ඉගිලෙන ලියමන් at 11:42 PM 1 comment: